Make sure you don’t ask for preferred pronouns because pronouns are not a preference. Just ask for pronouns.
– Cameron Airen

Every year, third October is observed as the INTERNATIONAL PRONOUNS DAY. It began in 2018 by a group of individuals as an independent project, with an aim to “make respecting, sharing and educating about personal pronouns commonplace.”

What is a pronoun?

“Wait, it’s just a pronoun? It’s okay if someone gets it wrong..” No it’s not. That is where we tend to go wrong.

Pronouns are not just a grammatical aspect of the language we use, but are highly integral to our  identities. A person’s identity is equally significant to them even if it doesn’t go with the societal norms. The people from the non-binary spectrum are explicitly affected by the usage of incorrect pronouns because it disregards and invalidates their identity.

Your identity is your right. It’s basic human tendency to expect people to respect us as we are, which also makes it decent human nature to address someone in a way which isn’t offensive.

And how to do that, is by asking people their pronouns if you don’t know of it already.

To make the internet a highly inclusive space, it is highly suggested that people add their pronouns in their descriptions, so that they’re not misgendered. Why it is more important for cis-gender people to do this, is because it creates a safer space for the transgendered people, as it reassures them that they can freely talk about pronouns, and they won’t be judges for it!

“Should I tell them I don’t go by that pronoun?”

Go ahead; This is exactly how you can stop people from misgendering you!

Assuming someone’s pronouns is disrespectful; it’s proving that you’ve fallen for the norms laid by society, pertaining to how someone looks determines how they identify. Of course, it is easy to just make up your mind by seeing someone with long hair, wearing a skirt, but you could be wrong. And even if there’s a higher possibility of you being right, it’s still always advisable to not assume. Pronouns are not defined by how you perceive someone, their gender remains relevant whether or not you understand it.

Can’t ask them either?

Still need to refer to them?

Use ze/zir or ze/hir.

When addressing someone whose pronouns you’re not sure of, you must use ze/zir or ze/hir.

“I haven’t met hir/zir, but I think ze is pretty cool”

“I don’t know zir/hir name, could you tell me?”

Ze – pronounced with a long “e”

Hir – pronounced as the word “here”

How do you ask someone for their pronoun?

Still seeming a little weird to a lot of people, this is a practice that isn’t as common as it should be considering how important it is. It shows that you respect and acknowledge the other person’s identity. It not only helps the other person feel more comfortable with you but also is a morale booster for them. 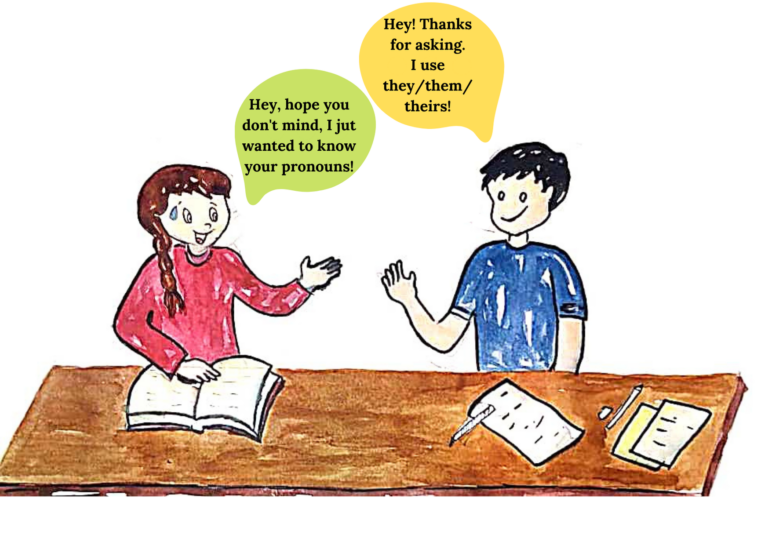 If, at times, you use the wrong pronoun later, with no such intentions of doing so, kindly apologise and be careful about it in future.

WHY PRONOUNS ARE IMPORTANT!

If you wish to learn more about the significance of correct pronouns, refer to the following books.