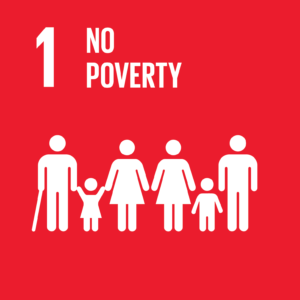 Poverty is the state of not being able to possess material possessions or having enough income to sustain an individual’s basic needs . It can include a lot of spheres such as social, economical, political etc. In addition to this, absolute poverty is the state of being so poor that even the basic amenities of life are inaccessible like food, clothing and shelter etc. More than 700 million people, or 10% of the world population, still live in extreme poverty today, struggling to fulfil the most basic needs like health, education, and access to water and sanitation, to name a few. After the COVID 19 a lot of families which were barely above the poverty line, or even individuals with jobs as gig workers were pushed into poverty due to the sudden onset of the pandemic which triggered a global recession as an immediate effect.

Even before the pandemic, The world attained the first Millennium Development Goal target—to cut the 1990 poverty rate in half by 2015—five years ahead of schedule, in 2010. According to the World Bank, in 2015, one in ten people were living on less than USD 1.90 a day. Nearly 1.1 billion fewer people are living in extreme poverty than in 1990. In 2015, 736 million people lived on less than $1.90 a day. The latest World Bank projections show that if we continue down a business-as-usual path, the world will not be able to eradicate extreme poverty by 2030. Now, after the pandemic, the damage control needs to be done faster and needs to be extended to a broader set of people in need of help. 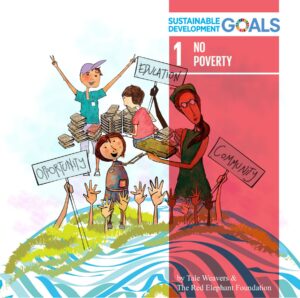 Poverty is the root cause of most issues that are faced by mankind.It entails more than just a lack or resources and material possessions required to lead a decent lifestyle. It doesn’t only affect the morale, psyche , health and education of an individual, but also commands their behaviour, social status and relationships. Individuals who are subjected to poverty often take to immoral professions because of lack of opportunities and just finding any way of earning a livelihood to sustain themselves, not worrying about the consequences of their acts.

Living on less than $2 a day feels like an impossible scenario, but’s a reality for around 600 million people in our world today. Approximately 8% of the global population lives in extreme poverty, commonly defined as surviving on only $1.90 a day, or less and since the COVID 19 pandemic has increased this problem by many leaps and bounds, it needs to be addressed urgently. Poverty is a multi dimensional issue which forms the base for a lot of other issues to branch out from. In case we start the issue of poverty, a lot of issues get sorted as we go. Since a lot of issues are co related, malnutrition, education and employment etc could all be sorted out as a chain reaction of battling poverty.

A positive way towards poverty eradication would be through inducting this issue in the national policies and plan of actions of all social centres in accordance with the internationally agreed agenda goals set and agreed upon. When poverty eradication becomes the end goal to be achieved by all policies and programmes, a substantial change can be created. Not just the government but even the other stakeholders like policy makers, non government organisations, civil societies, citizens , schools etc should work towards targeting and solving the problem at their individual levels.

The Second United Nations Decade for the Eradication of Poverty (2008-2017),  proclaimed by the General Assembly in December 2007 aimed at supporting such a broad framework for poverty eradication, emphasizing the need to strengthen the leadership role of the United Nations in promoting international cooperation for development, critical for the eradication of poverty. Further, the Target 1.5 of the first Sustainable Development Goal talks about how by 2030, we need to build the resilience of the poor and those in vulnerable situations and reduce their exposure and vulnerability to climate-related extreme events and other economic, social and environmental shocks and disasters. 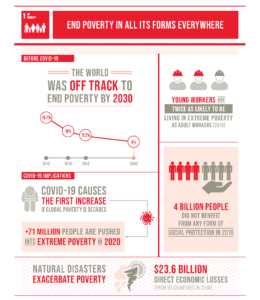 This is the second post in the series of posts which will give you a brief understanding of what the Sustainable Goals are. Stay tuned for more!