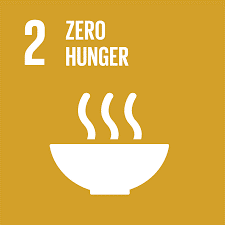 Food forms one of the most fundamental essentials that an individual requires to survive, right along with shelter and clothing. Food constitutes a basic ingredient that forms an individual. Being a substantial contributor to the physical and mental state of an individual’s body, food becomes the central point of focus when identifying the source of body-related ailments.  Ending hunger is a goal which revolves around this same issue. When a person gets good nutritious food, not only does it affect the present health of an individual but also affects growth of future years. Food comes into picture from the pre natal stage of an individual’s life. What a mother eats before she conceives also has a say in how healthy the new born will be. A balanced and healthy diet during a child’s formative years forms a basis for a stronger adulthood and extends even further to the old age and up till death. For example, when a child is provided with dairy products throughout his adolescent years, he has strong bones, which will help in preventing bone related problems in the future. Not just this, but the lack of access to food becomes a root cause of all problems. The need to take care of hunger, and the lack of the ability to thereof defines poverty. In case a child doesn’t get good food growing up, he will be transformed into a weak adult. A weak adult will be prone to falling sick several times, thus endangering the probability of working and earning a living. Since the said individual has lost employment opportunities because of constant sickness, source of money to take care of his hunger would be questionable, he’d take up to committing crimes like stealing to satiate his hunger. Now, in a different paradigm, all the related problems stemming out can be solved by just taking care of the core aspect- Hunger. 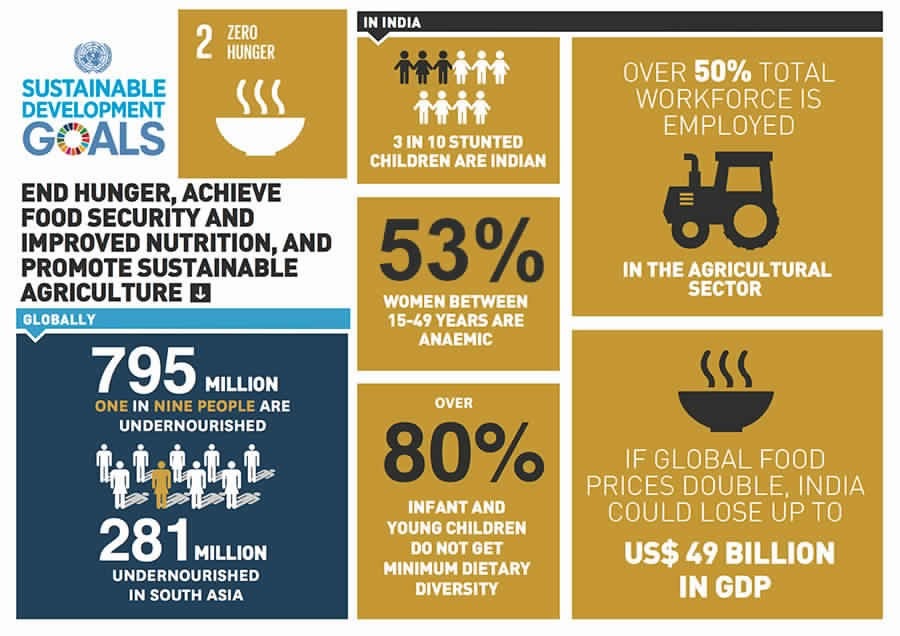 The problem related to food is not only limited to the crimes being committed by its absence, but also its presence. Accessibility of food is also an issue in itself. This is showcased when developed countries like USA have an issue of having a substantial population in the obese category, whereas, developing countries like India are still trying really hard to combat the problem of malnutrition. Increasing the accessibility and the quality of food solves a lot of problems from its roots.Hunger is the leading cause of death among masses, in order to prevent this, the use and promotion of sustainable methods of farming would be a very welcome change. Not only will it increase the output of the produce but will also decrease its negative impact on the planet.

To achieve this goal, 8 specific targets have been laid down these specific targets complement achieving the goal of zero hunger.These targets cover all aspects of food, from its production and consumption to its accessibility.It even provides a way of increasing investments in this sphere through international corporations etc so as to make it widely accessible to any and everyone who may require it.

The South Asian sub continent has over 15% of its population in the undernourished category. India itself is home to at least 4.46 million stunted children, even when over 40% of its population is deployed in the agricultural sector. The problem is a wide one, but the solution has also been incorporated to adapt to the wide scale aspect of addressing this issue. The government of India has formed a lot of national level policies just keeping the aspect of SDG 2 in mind. Be it the National Nutrition Mission, which aims at improving nutritional outcomes for children, pregnant women and lactating mothers, to the mid day meals, that ensures that a child gets food at the school he’s attending, which serves as an incentive for parents to send their children to school.

The road to achieving zero hunger is a long one, but not a dark one. In a domestic arena, the government along with  ngos and civil societies working to achieve this substantially contribute to making a change. Globally, International organisations like the Food and Agriculture Organisation which is a subsidiary of the United Nations, network with people and formulate programmes to combat the issue of hunger.

This post is the third post in the series of What Are SDGs? Stay tuned for more!