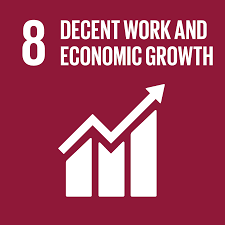 According to the International Labour Organization, a total of 172 million people globally were unemployed in 2018, which corresponds to an unemployment rate of 5.0 per cent.

As the UN explains: “Roughly half the world’s population still lives on the equivalent of about US$2 a day. And in too many places, having a job doesn’t guarantee the ability to escape from poverty. This slow and uneven progress requires us to rethink and retool our economic and social policies aimed at eradicating poverty.”

The UN aims to promote inclusive and sustainable economic growth, employment and decent work for all with the help of SDG 8. Sustained and inclusive economic growth is a prerequisite for sustainable development, which can contribute to improved livelihoods for people around the world. Economic growth can lead to new and better employment opportunities and provide greater economic security for all. Moreover, rapid growth, especially among the least developed and other developing countries can help them reduce the wage gap relative to developed countries, thereby diminishing glaring inequalities between the rich and poor.

If we come to look at the statistics, nearly 2.2 billion people live below the US$1.90 poverty line and poverty eradication is only possible through stable and well-paid jobs. Globally, annual GDP growth declined from 4.4% in 2000 to 3.2% in 2017. And, in too many places, having a job doesn’t guarantee the ability to escape from poverty. A continued lack of decent work opportunities, insufficient investments and under-consumption has led to an erosion of the basic social contract underlying democratic societies that all must share in progress. The creation of quality jobs remains a major challenge for almost all economies. But inclusive growth must also be cognisant of the needs of the most vulnerable – children, youth, and women.

Developing countries have grown at a rate faster than developed regions. Economic growth makes our world more prosperous. Building stronger economies will help us afford more opportunities to build a more resilient and sustainable world. And economic growth must be inclusive: growth that improves the wellbeing of all sections of society, especially the most vulnerable.

Apart from women’s participation in the labour force, labour underutilization is more prevalent among women which means that they have to be classified as underutilized labour. This group of people who are looking for a job but are not available to take up employment, or who are available but are not looking for a job, includes far more women (85 million) than men (55 million).

Before moving onto the targets set by the UN, we need to understand what ‘Decent Work’ means. It means opportunities for everyone to get work that is productive and delivers a fair income, security in the workplace and social protection for families, better prospects for personal development and social integration. It is also important that all women and men are given equal opportunities in the workplace.

A continued lack of decent work opportunities, insufficient investments and under-consumption lead to an erosion of the basic social contract underlying democratic societies: that all must share in progress. India can forge its own growth path, which can rely on both manufacturing and services as a growth escalator and employment generator. The challenge will be to create well-paying and productive jobs in non-farm sectors that can absorb more unskilled workers, including women and those in rural areas. As of today, labour-intensive manufacturing has not driven productivity growth and job creation. The sectors that have made productivity gains have been skill-intensive. Almost half the labour force in India still works in the agricultural sector. With low productivity, it is difficult to promote gainful employment in agriculture. Enhancing agricultural productivity through public investment and new technologies should be a priority focus area.

Moreover, upgrading to high-value commodities, reforming agricultural marketing policies and market interventions, and strengthening linkages to agri-businesses are critical areas ripe for government intervention. Increasing the labour force participation of women is a powerful tool not only to empower women, but also to steer economic growth itself.